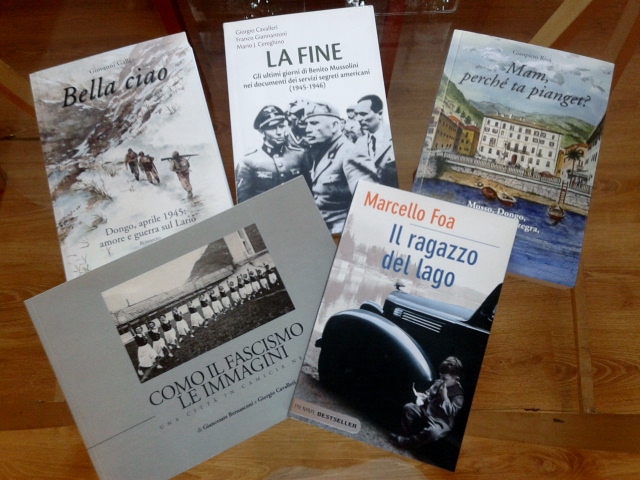 The exhibition takes place in the ground floor rooms of the historic Palazzo Manzi: a multimedia narration which involves the visitors in an interesting frame of memoirs and tales.

Video projections and soundscapes bring back to life the heroes of the Resistance and the defeated in an immersive experience designed to engage and inform people of all ages.

The seven rooms of the museum are organized in this way:

ROOM 1 – The days of Liberation

Room 1 is an introduction to the Museum: it presents the situation in Italy in April of ’45 and a wall-sized print shows Palazzo Manzi in those days. The newspapers are hanging from the ceiling: it’s “raining news.”  Audio tracks report the radio announcements of Radio London (coded messages and news), during which the voices of Sandro Pertini and of the colonel Harold Stevens are clearly recognizable.

In the room, totally dark, the visitors can see a particular and interesting “film”: on the mirror wall some objects are enlightened; they narrate the episode of the capture of the fascist hierarchs and of Benito Mussolini. Finally, an original video of the period will show the execution of Mussolini and the hierarchs displaying original and inedited images as well.

ROOM 3 – The years of Resistance

Room 3 is dedicated to the memory of the local partisans. On the walls are the photos of the Resistance’s protagonists, while a voice quotes many excerpts from texts and letters written by the same partisans.

ROOM 4 – The Red and the Black

Separated in two areas by an Italian flag, Room 4 is composed by images and words written on the panels. The room faces the two opposite realities of the resistant factory (Falck) and the garrison of the fascist Black brigades.

One of the most suggestive rooms of the museum: the chairs disposed around the fireplace remember when grandparents, at evening time, told their grandchildren their stories. The stories are here the memoirs of the partisans, of the fighters and of the people who experienced the war or the Resistance.

Room 6 is a deep analysis of many various themes, which regard not only the territory of Como and its province but all the European continent. A wall, in fact, presents interesting panels which narrate the partisan and fascist vicissitudes in the area of Como, and the phenomenon of smuggling. On the opposite wall, the scenery widens to Europe, and the events of war between ’43 and ’45 are remembered. The events of Arromanches-les-Bains, sister-town of Dongo, are particularly underlined: Arromanches is in fact one of the localities in Normandy where the D-Day took place on June 6th 1944. Special attention is also paid to the liberation of Como by the partisans and the following coming of the Allies on the lake.

Room 7 is an immersive environment: the video will be projected by mirrors on the white walls of the room. The images are shown in irregular way in order to convey an emotional disorientation. The videos narrate the days immediately before the capture of Mussolini, when on the mountains of Dongo the fascist soldiers killed many partisans (among them Giulio Paracchini, to whom is now dedicated the square in front of the museum). This episode created a rancorous feeling in town, just 3 days before the capture of Mussolini.