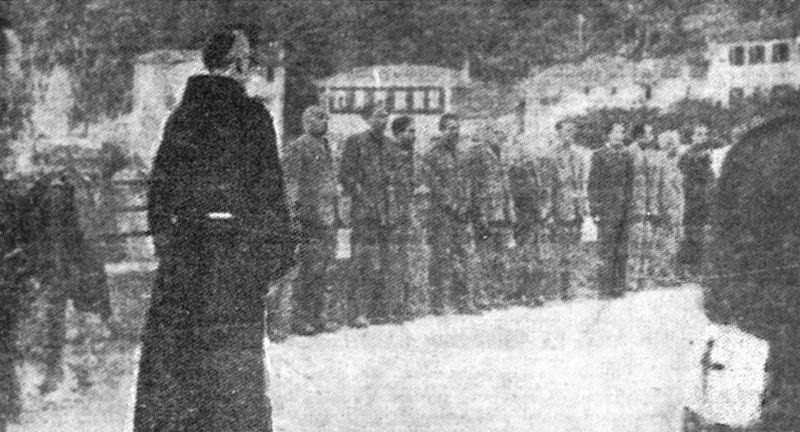 Father Accursio Ferrari of the franciscan sanctuary gives absolution to the Senior Fascists, lined up on the lakeside before the shooting. 28.4.1945

The square is now dedicated to the partisan commander Giulio Paracchini (nom de guerre “Gino”), killed by the black brigades in the mountains of Dongo on April 24th, 1945. Piazza Paracchini is the exact place where the column of German vehicles, while trying to make its way to Switzerland,  was stopped and inspected; hidden among the German soldiers, the partisans found Benito Mussolini and the Senior Fascists. The community of Dongo saw Mussolini while getting out of a German antiaircraft vehicle and entering Palazzo Manzi, where he was officially arrested by the commander of the 52nd brigade “Giuseppe Garibaldi”, Pier Luigi Bellini delle Stelle “Pedro”.

The lakefront is the site where the 15 fascist loyalists of the Duce were shot, executed by the troop of Walter Audisio, “Colonel Valerio”. The historic railing has never been substituted and still bares the bullet traces of the soldiers’ guns. After the execution the bodies, including those of Mussolini and Claretta Petacci, were brought to Piazzale Loreto in Milan, in order to be exhibited to the public. Among the fascists executed in Dongo, the RSI Ministers Ferdinando Mezzasoma, Paolo Zerbino, Augusto Liverani, Ruggero Romano, the undersecretary of State Francesco Barracu and the secretary of the Fascist Party Alessandro Pavolini.